All these questions and not much more will be answered in Shakma (1990) directed by Tom Logan and Hugh Parks.

Since there’s really not much to say about this truly unyieldingly awesome film I shall keep it all rather brief.

Some research folks inject something that looks like urine into the brain of a baboon. Head scientist/doctor/professor, Sorenson (Roddy McDowell), then orders the tainted monkey to be put down. As night falls the students decide to play some sort of extra nerdy cross between Capture the Flag and Dungeons and Dragons in the facility. Weird set up, right? It’s really just an impetus to get the flat, young, nubile characters to wander the dark corridors of the the lab so they may be picked off one by one by the BABOON WHO ISN’T REALLY DEAD!

I’m not sure if Roddy McDowell (who I really do like as an actor) was personally seeking out movies with monkeys in them or maybe his agent was or maybe the filmmakers thought he’d be perfect because he was in all of the The Planet of the Apes movies. In any event I feel sorry for him. He gets jacked up too soon…but then he was too good for this movie. 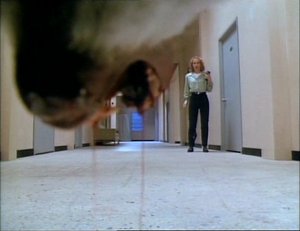 The boring characters wander the halls only to stumble upon the mangled corpses of their friends. The handiwork of an enraged baboon perhaps? Most of the film consists of people walking through hallways, being surprised at the baboon, running and slamming doors shut, and finally the baboon (Shakma) banging his little body into the doors repeatedly. There is one pretty good kill in a bathroom stall (maybe more funny than good) and the ending is pretty decent, but other than that it’s a fairly bland and styleless “animal attacks” movie.

The sterile, unnatural hallways of the medical research facility (?) reminded me of After Last Season but slightly upgraded.

The real live animal performance is good I suppose. The baboon only has to be angry and slam into doors. The real hindrance that prevents the murder-baboon sub-genre of “animal attacks” movies from clicking is that the baboon is such a dim, dopey looking animal. He has blank, glassy eyes and his stature is not very formidable (about the size of a mid-sized dog). He does have the teeth and he can bounce off walls, but when I think baboon I don’t think terror. I will give it this though: killer baboon makes more sense than killer shrews or rabbits.

I only wish they killed the baboon my way—by donating it to Jeff Goldblum for his teleporter research. That might have been more satisfying.

Speaking of Jeff, there’s even a few schticks in this movie that Jurassic Park (1993) might have nabbed if I thought anybody actually watched this movie.

Basically Shakma is another run-of-the-mill brainless monster-kills-the-teens movie. It’s not particularly interesting or good. So why do I write about it then? Simply put, the name Shakma just demands to be repeated. Say it. Shakma. Yeah. You know it’s gonna bad but you kinda wanna see it.

For a forgettably dopey movie about a rampaging murder-baboon look up Shakma. Or at least say it a few times and get it out of your system.