We hailed a taxi in Yongin at around 5 in the morning. The buses don’t start running until near 6 in Korea. The taxi deposited us at Suwon station where we boarded the train to Busan. The five hour ride across the quiet and foggy Korean countryside was pleasant and uneventful. Upon arriving in Busan we met our final companion and proceeded to penetrate deep into the world of cinema. 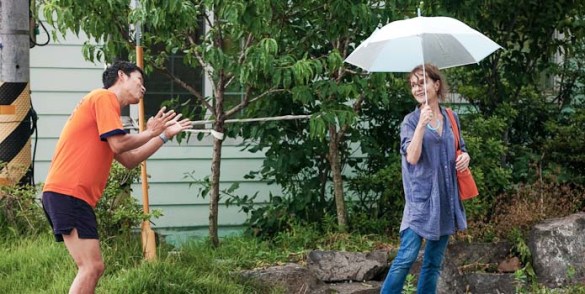 The first film we saw was probably quite fitting for us. It was a South Korean film about a western woman visiting a small Korean town. It was aptly titled In Another Country (2012). The simple story of a French lady going to a small Korean town might have been entertaining on its own, but director Sang-soo Hong knows how to add layers and interest. It is told three times, with actress Isabelle Huppert (I Heart Huckabees) becoming a slightly different character (all named Anne, however) each time  the film stops and tells a different story—all with the same locations, supporting characters, and loose tie-ins to the other plots. The story is also vaguely hooded within the context of a girl writing script ideas on a legal pad to cope with her ambiguous home anxiety. And so our elliptical wheel turns. It’s a quiet, modest, nonlinear film whose structural cunning and obscurity compensate for whatever some might deem a low budget. In Another Country reminded me of a sort of cross between Certified Copy (2010) and Run Lola Run (1998)…but I liked it better than those particular films. Among its many charms is Yoo Jun-sang as the mildly awkward but unflappably gregarious lifeguard whom Anne repeatedly has run-ins with. The lifeguard character effortlessly steals every scene he is in. Another shout out goes to the monk dude. I admit my bias when discussing this film as many of the smaller scenarios endured by the central character resemble many of my own since moving to Korea, but I think the average movie goer will probably enjoy this strange little beast all by themselves.

After the film we wandered down to the beach and ate some spicy Korean octopus. 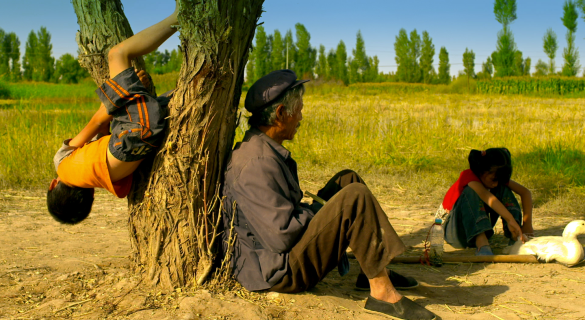 Fly with the Crane (2012) was to be the next film we would view. Directed by Rui Jun Li, this somber and earthy Chinese movie feels more like a dramatization of a National Geographic article than a cinematic fiction. This is not Crouching Tiger, this is a gorgeous, meticulous, and authentic feeling movie about the subtly shifting winds of change. Old Lao Ma (Xing Chun Ma)  is a 73 year old retired coffin maker living in rural China with his adult children. His role as a figure to be respected is gone and he is viewed more as a cumbersome relic clinging spitefully to traditional ways. When burials become outlawed in his province in favor of cheaper and faster cremations, the dying wishes of Ma and all the town’s elderly is in crisis. Tradition demands they be buried in the earth so that the white crane can carry them to heaven. Nobody wants to end up as smoke. When the government even begins to dig up Ma’s friends who have had secret burials things become more upsetting. The world around Ma is changing, even if it still seems very under-developed and simple to some, and with the coming of change so perishes the traditions of the old. Fly with the Crane is slow and simple but rich in its humanity. For a movie about a tragic figure trying to plan his own funeral it’s not without some moments of gentle humor and simple humanity. Although it is shot in largely very long takes (Bela Tarr fans will be fine) that let you just steep in the environment, the pace never drags and the music (although its use is sparse) is wonderful and well-placed. I cannot reveal the ending, but let’s just say I don’t know that I was mentally prepared for the final scene.

Following a fitful night’s sleep on a solid wood floor we were up again at 6 to wait in the ticket line. We managed to obtain precisely the tickets we were looking for. 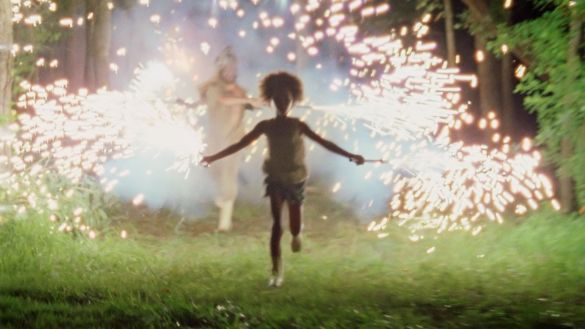 Film three was the only movie I had been aware of back in the states. I had wanted to see it but was afraid I’d be in the wrong country at the time of its release. Ha! Beasts of the Southern Wild (2012) is an American film directed by Benh Zeitlin and based on a play by Lucy Alibar. While the film unfolds as an immensely gritty American fable and allegory for the events surrounding Hurricane Katrina, it proves to be also a hardy story about resilience, home, stubbornness, and maybe even the desire for one’s existence to be validated and remembered. Beasts combines elements of the real world but punctuated by an exaggerated logic and a poet’s sensibilities. The cast is great but it is the lead role of Hushpuppy played by six year old Quvenzhané Wallis that makes it all work. As the film itself quips, “The whole universe depends on everything fitting together just right. If one piece busts, even the smallest piece… the whole universe will get busted.” A child actor can make or break a film, and little Quvenzhané really makes it. The story follows the tough little girl, Hushpuppy, as she deals with living in uneducated squalor with her erratic and volatile father on the wrong side of the levy in a dilapidated bayou community called the Bathtub. Things go from bad to worse when the Storm comes and floods their world and then the ice caps melt releasing prehistoric bloodthirsty aurochs that rampage their way to the Bathtub. It is an edifying experience for the imagination and a welcome emotional letter for the soul. Much is dealt with and all from a child’s eye view. Between the amazing score that stirs your very core, the almost Herzogian use of animals, the sumptuous photography, and powerful pint-sized performance this proves to be a special movie indeed. The innovative auroch special effects were done by Death to the Tinman and MGMT music video director, Ray Tintori.

And then ate Vietnamese food alfresco.

So three solid movies in a row. We were doomed for a stinker, right? No so. 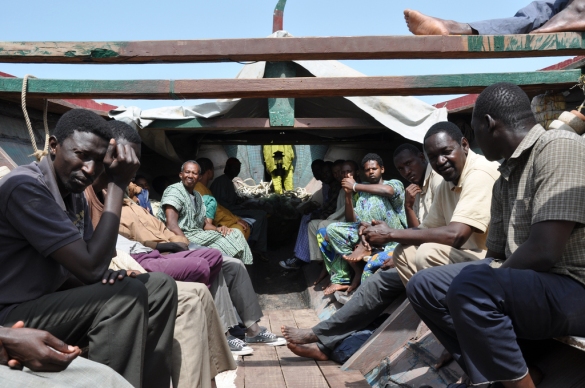 The last film we were able to catch before our train was The Pirogue (2012), a Senegalese production directed by Moussa Touré. I had no idea what a “pirogue” was before watching this movie. Apparently it’s not at all like those Polish ravioli things [pirogi]. The story concerns 30 Africans who are attempting to illegally immigrate to Europe via Spain. The trouble is they must face long uncertain days on the unforgiving Atlantic Ocean in a glorified canoe-type boat called a pirogue. This is a very even-handed drama that does not feel manipulative. Every character is a person with individual hopes and dreams and everyone’s will is eventually tested on their doomed sojourn. Storms at sea are bad, but when your craft is as exposed and vulnerable as theirs it becomes devastating. Soon desperation sets in and they begin to wonder how long their journey will go on. I do not wish to give away too much because the less you know going in, the more powerful the drama will be. This film was inspired by the thousands of Africans who have made similar journeys to Europe and the thousands who perished attempting it. This is not Hitchcock’s Lifeboat (1944). Much like Fly with the Crane, The Pirogue feels very authentic, which makes each moment that much more believable and heart-breaking. Arizona law-makers should watch this movie. We, in America, think we’re the only ones with an immigration problem, but it is a cross-cultural occurrence that challenges many nations, and all of those nations might benefit from viewing the phenomenon from the other’s point-of-view. The cast is powerful and despite the bulk of the drama unfolding in one space (a rather crowded boat) it holds your attention because you’re never sure what will happen next.

All in all I’d say we were blessed to see the diverse and amazing films we did. My big regret was that we only got to see four movies. There were so many other ones we wanted to see, but it was just too difficult and we only had two days. The International Busan Film Festival was an absolute delight and I highly recommend all the magnificent movies I saw.

The following day I was back at work and watched a film of a much different nature. It was a PSA about sexual harassment at work, but it was all in Korean so I’m not sure what I was meant to learn. Is spanking my coworkers a bad thing?