Walt Disney produced one of the most daring animated feature achievements in history when his studio full of talented artists developed Fantasia (1940). From bow to stern Fantasia is a masterwork, a wondrous marriage of classical compositions and powerful animation. It’s beautiful, humorous, imaginative, and willing to surprise at every turn with each new animated technique used to interpret the gorgeous music. Several years after this celebrated film a little Italian movie was made, a sardonic response or riff on this immortal classic.

More recently I had discovered that my local library carried an old, worn-out VHS of this strange foreign artifact and, as I’d been searching for it for quite some time, I made ready use of my library card. Sadly it is not available in the United States on DVD of Blu-ray yet. With the film in my bookbag, I traveled to yet another library (my old alma mater and then-current place of employment) to utilize their free VCRs. There I was, alone with my thoughts, a headset, a 9 inch TV screen, and a scratchy, used copy of Bruno Bozzetto’s Allegro Non Troppo (1976).

An over-confident narrator informs us that we will be witnessing an unprecedented event: brilliant, original animations set to legendary classical music compositions…until Hollywood calls him mid-speech and tells him that someone named Bizney or Frisney already did that in 1940. BUT THE FILM MUST GO ON! And go on it does. 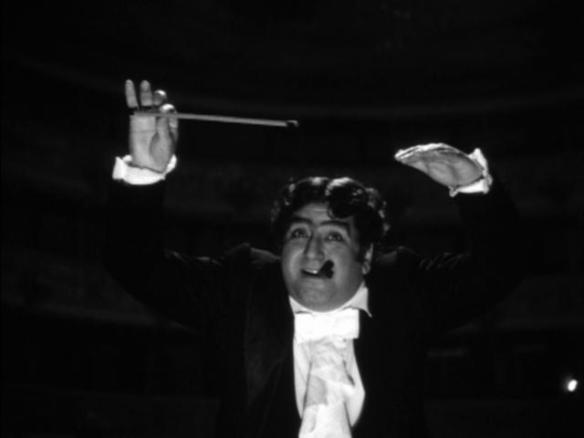 A group of embittered old ladies are harvested into a livestock truck to be escorted to the theater where their instruments await. With the geriatric band of curmudgeonly females in place, the pompous, bloated, cigar-chomping conductor enters (he reminded me of a svelter Mr. Creosote from Monty Python’s Meaning of Life). The tacit animator is brought out of the dungeon to sketch the music live as it is played. The animator’s slanted desk provides much opportunity for slapstick gags and it proves to be a constant struggle for the mousey, mustachioed artist. With the warped live-action re-imagined elements of Fantasia set, the orchestra comes to life. 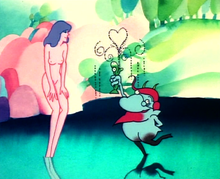 Claude Debussy’s Prelude to the Afternoon of a Faun is first on the program. A sad, dumpy satyr lopes along through a lush garden inhabited by sleek, sultry, and noticeably nude wood nymphs. The satyr, recognizing his lack of physical appeal, attempts to beautify himself, but nothing works and he gradually shrinks away into misfortune and comical melancholy. The piece presents very human insecurities regarding self-image and unfulfilled desires for sex and love. Like many a great comedy, this short has fun at the expense of its doomed protagonist. This piece has some wonderful sight gags and clever bits of surrealism (such as tempting trees made of legs and boobs, etc.).

You couldn’t have a film like this and not have the ornery conductor beat up on the old ladies. So he does. Don’t worry. But right after his assault on granny we get Antonín Dvořák’s Slavonic Dance No. 7, Op. 46. This cartoon features a man who will do anything to get away from his intolerable society. He leaves the rocks to build a hut, but everyone in the rocks copies him. He next builds a house and a tower, but the rest of the mindless population just follows suit. He can’t get away! It all culminates in a humorous game of Simon Says that doesn’t go exactly the way the little rebel hoped. 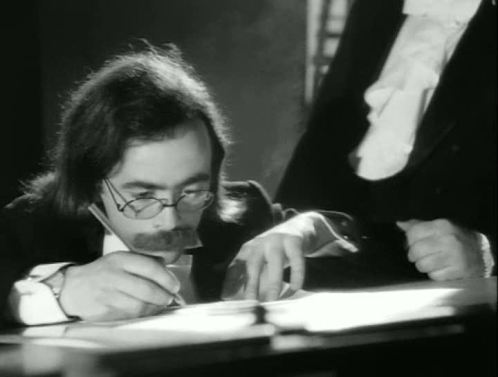 There is a slop break for the orchestra and nasty tins full of gruel are ladled out to the old ladies and the animator (who fights to keep it on his slanted drawing desk) while the conductor and the narrator enjoy a decadent candlelit meal. When all the food is gone and the woeful animator, still not having ingested a morsel, reaches for a Coke that is snatched away and glugged down by the greedy conductor. He then tosses the bottle carelessly into the audience. Taking cues from both his own anger and the image of a flying bottle, the animator proceeds to sculpt another brilliant short to the tune of Maurice Ravel’s Boléro. This is perhaps the best segment of the whole film. A nearly empty Coke bottle is tossed by a careless astronaut and left on some unknown planet. The remaining drops ooze out of its glass prison and develop eyes, then a nose, sentience, and finally locomotion. The amorphous blob evolves into more complex and surreal organisms and soon an entire food chain and ecosystem is formed and we are following a parade of boneless, squishy dinosaur-like creatures to Boléro‘s wonderful tempo. A mischievous and rather unscrupulous ape-like creature uses a club to kill random critters. As the tormented procession of evolutionary oddities marches on they are badgered by tornadoes, the cross, a spear, a tank, freeways, and are ultimately done in by a booming metropolis. An enormous statue of a man stands alone, but it too finally crumbles and the ape-like creature emerges from the wreckage and shrugs. 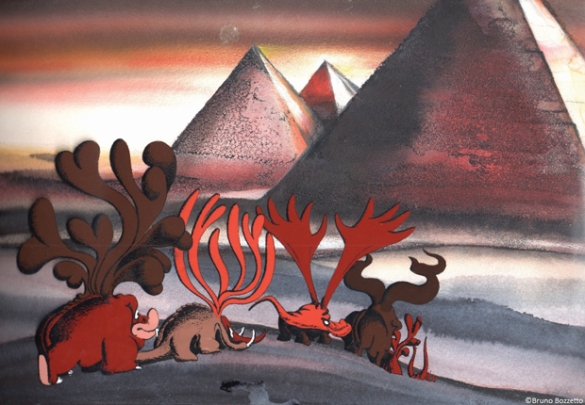 Back in “reality” a gorilla attacks the animator, it snows in the theater, and there is an impromptu dance sequence. Then it’s back to the drawing board for Jean Sibelius’ Valse Triste. This is the saddest piece on the program as it features the optimistic hallucinations of a starving-to-death stray cat (think Hans Christian Anderson’s “The Little Match Girl”). The cat lives in a ruin of an old house that sits like an island amidst a see of identical cubed buildings. The cat imagines what the house might have been like in its glory days and soon phantoms of past owners appear and fade away. Hungry and alone the cat fades along with the phantoms and what was once a glorious home full of stories, art, and character gets the wrecking ball. 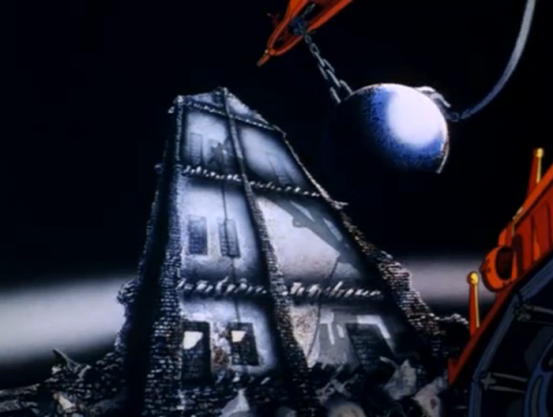 Next it’s Antonio Vivaldi’s Concerto in C Major. A fastidious cartoon bee meticulously sets her table (a daffodil full of pollen). Her silverware, napkins, and television all in place and the sun just right she prepares to dine, but is disturbed by a necking couple out for an amorous tumble in the field. This delightfully amusing piece is punctuated by a very funny escalating altercation between the conductor and the animator. Will the arts never see eye to eye?

The last musical piece is Igor Stravinsky’s The Firebird (which was featured in Fantasia 2000). The music ever so cleverly reinterprets the saga of Adam and Eve. The twist in this version is that the people won’t take the fruit and so the snake eats it himself…and gets thrust into a hellish world of consumerism and pornography (perhaps the same thing?). The snake is tormented by giant demons and exposed to all manner of diabolical and sexually-charged advertisements and other harvests of materialism. 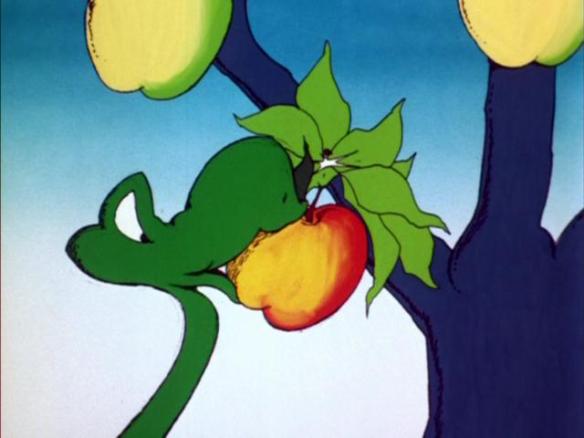 When the cartoon concludes the animator runs off with the cleaning woman and the orchestra folds, leaving the narrator with no other choice but to ask the dimwitted “Frankenstini” to find a finale. The finale is a grotesque amalgam of images, violence, and what-have-you set to a disruptive cacophony of musical pieces overlapping each other until finally reaching its delirious apex in a violent explosion.

I’ve heard differing arguments for this film; some praising it, others seeing it as a trivial parody of a classic. I admire this film. It is not Fantasia nor does it wish to be. Fantasia was a beautifully imagined experiment executed with precise artistic flourishes and a languid pace. It is an undisputed classic. Allegro Non Troppo might not be as artistically complex, but it is every bit as cunning and all the more biting with its sharp, sardonic wit. Fantasia dealt with what music makes us feel and imagine and did an astounding job. Allegro Non Troppo uses music to conjure cynical but humorous ideas of society and humanity. It deals with adult themes such as urban development, isolation, modernization, death, pain, frustration, sexual longing, and societal disenfranchisement and it does so all with a wry sense of whimsy. Nothing is ever on so grand a scale as it was in Disney’s classic, but this humble film’s intimacy places it in a unique position for a more subtle social satire without distracting presumptuousness. Only a comedy could muse so sharply and eloquently about such human topics. And some segments beautifully parody Fantasia, such as the satyr bit when compared to the centaur scene or their own distinct takes on the march of evolutionary progress. 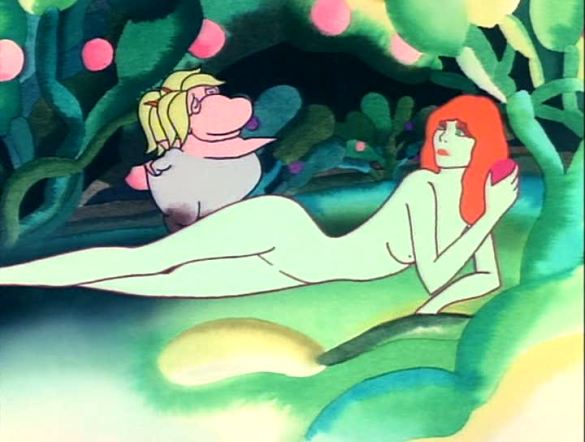 I think the films compliment each other nicely and the music is just as lovely and well utilized to convey an idea or story, although perhaps not quite as memorable. The idea of setting clever toons to classic tunes is a fun one. Heck, even Tiny Toon Adventures did an episode like that. I recommend this film (if you can find a copy of this elusive specimen) for anyone who loved Fantasia…or hated it.

1. Old ladies get beat up and mistreated. Comedy gold!

2. Although the animation might not be as colorful or grandiose as Fantasia, it has a great style all it’s own that Disney could never have pulled off.

3. One thing Allegro Non Troppo does that might suit today’s ADHD audiences is keep all of its musical segments very short. I love Fantasia, but as a kid I always felt like some of those things went on forever.

4. It’s not the artistic slap in Disney’s face you might be expecting, but it’s probably close. 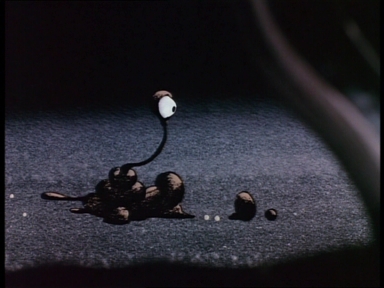 6. I won’t tell you it’s more sophisticated than Monty Python’s stuff, but some of it definitely reminded me of their style of humor.

7. The animated interaction with the music is subtle but very effective.

8. You might actually laugh and cry. Maybe you won’t. Shut up and watch it.

9. How often do you get to see this much artistic talent coupled with great classical music AND a snarky sense of humor?

10. It’s cleverness and irreverence is overshadowed only by its humorousness.

Originally published for “The Alternative Chronicle” May 2, 2011