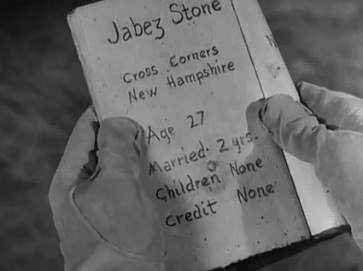 We folk hear tell of stories of the supernatural; of encounters with vile critters from far beyond this plane. Faust made a deal with Beezlebul, and Tom Walker did too. Charlie Daniels commemorated Mephistopheles’ trip to Georgia in song and Tenacious D challenged the Prince of Darkness to a rock off.

Taking cues from the Faust and Tom Walker legends, there was written yet another tale; the tale of the unfortunate New Hampshireman, Jabez Stone, who departed with his soul for two cents and bestowed it upon cunning Old Scratch himself. Stephen Vincent Benét’s classic short story, “The Devil and Daniel Webster,” reminded the reader of the pride of being a real, red-blooded American and warned of the dangers of taking the easy path. It was a fable as simple, earnest, and true to the spirit of America as the words of Twain or Irving.

The 1941 RKO adaptation was a special sort of film. Directed by William Dieterle (The Hunchback of Notre Dame) and starring Edward Arnold (Mr. Smith Goes to Washington) as Daniel Webster and Walter Huston (The Treasure of the Sierra Madre) as the devil, The Devil and Daniel Webster was one of those unflinching American movies that celebrated legendary ideals in much the same way John Ford’s Young Mr. Lincoln (1939) or Frank Capra’s Mr. Smith Goes to Washington (1939) did. They hearken back not to the current America we know and picket, but the magic in what it all was supposed to be once upon a very long time ago. There’s a profound sense of patriotism in these movies and so what better foe for a proud American orator like Mr. Webster than the devil himself? If he can beat Satan and save Jabez Stone’s soul then perhaps there is hope for the rest of America.

Get off my back.

Jabez Stone (James Craig) is an unlucky New Hampshire farmer in the 1840s. He dreams of being a lucky man. This is just the kind of thing that Scratch waits for. [Scratch was a regional colloquialism for the devil, which adds such sumptuous local atmosphere to the story, don’t you think?] Scratch (Walter Huston) is as subtle a Satan that ever graced the silver screen. He’s tattered and unassuming, yet somehow diabolical and refined. He seems like just another kooky old coot, but there’s a sinister confidence that broadcasts all too loudly just how much sharper he is than you. He has an oily grace and a malevolent grin full of ingratiating teeth. His tricks and entrances are subtle but subtly disturbing. He accepts Stone’s soul and promises him seven years of good fortune, but as we good folk all know, the devil does not soon forget a deal and he always comes to collect. Jabez Stone loses his humanity and happiness and even pushes away his wife (Anne Shirley), mother (Jane Darwell), and friends all in favor of the acquisition of wealth. He builds a mansion and bankrupts fellow farmers and spends more and more time with a crafty demon maid (Simone Simon) while his young son becomes increasingly bratty and malicious.

When Jabez Stone’s poor wife can take it no more she gets the only person who can help him: the great senator, statesman, and New Englander, Daniel Webster. Attack of the history!

I enjoyed this movie the whole way through. Up until the final act it’s a splendidly solid film about the trap of greed, but in the homestretch it just gets awesome. Famous historical orator, Daniel Webster, will defend the fallen Jabez Stone against Scratch in a trial in Stone’s barn on the very spot where the deal was initiated and the judge and jury will be a court of the damned. The jury are all famous condemned Americans (pirates, chiefs, traitors, murderers, and madmen) brought back from hell to judge whether or not Jabez Stone and Daniel Webster will keep their souls or be turned into moths and kept in Scratch’s pocket. Them’s some high stakes. How awesome is this? The answer: pretty awesome. 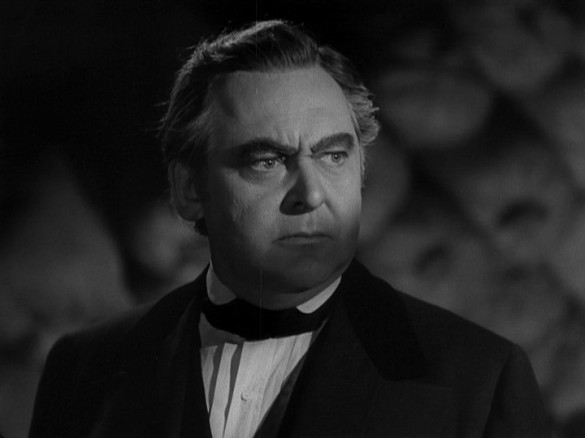 The great Walter Huston (father to John and grandfather to Angelica) was nominated for an Oscar for his performance, but lost to Donald Crisp in How Green Was My Valley. Mr. Huston was full of wonderful characters. Fortunately he did win best supporting actor for Sierra Madre (directed by his son). Huston really is one of the best movie devils. Some movie devils are quietly unnerving like Robert De Niro (Angel Heart) or corporate and bombastic like Al Pacino (Devil’s Advocate). Sometimes they’re more sinister businessmen like Peter Stormare (Constantine) or Billy Crystal (Deconstructing Harry). Other times Chuck Norris can round-house kick the devil in the face (Hellbound). I like ’em best when they’re merely amorally mischievous like Peter Cook (Bedazzled) or Danny Elfman (The Forbidden Zone). Another shout out goes to Tom Waits’ superb portrayal of pure evil in The Imaginarium of Dr. Parnassus. Trey Parker’s gay Satan from South Park is another favorite. F. W. Murnau had a particularly grand representation of the devil for his adaptation of Faust (Svankmajer’s version is a bit weird). And yes, yes, Tim Curry had good makeup in Legend but I like my Lucifer more subtle. The devil is always a fun character in movies and while we might never know who’s is the most accurate depiction, we can all have our opinions of who is the most fun to watch.

It must be said: I love this movie. The Devil and Daniel Webster is fantastic. It’s wonderfully produced with some great photography, lighting, music and many lines of dialogue (particularly those of Scratch and Webster) were taken directly from the short story. As a fellow New Englander (and someone who loves history), I enjoyed much of the feel for the location and the attitudes of the characters. It feels distinctly American, but perhaps moreso the pure America of legend and folklore. It’s as refreshing and pure as a slice of apple pie. Read Benét’s short story and go watch this movie.