I do it again. I watch da moobies. I list da moobies werst 2 best.

Nothing means anything. Watch more movies. 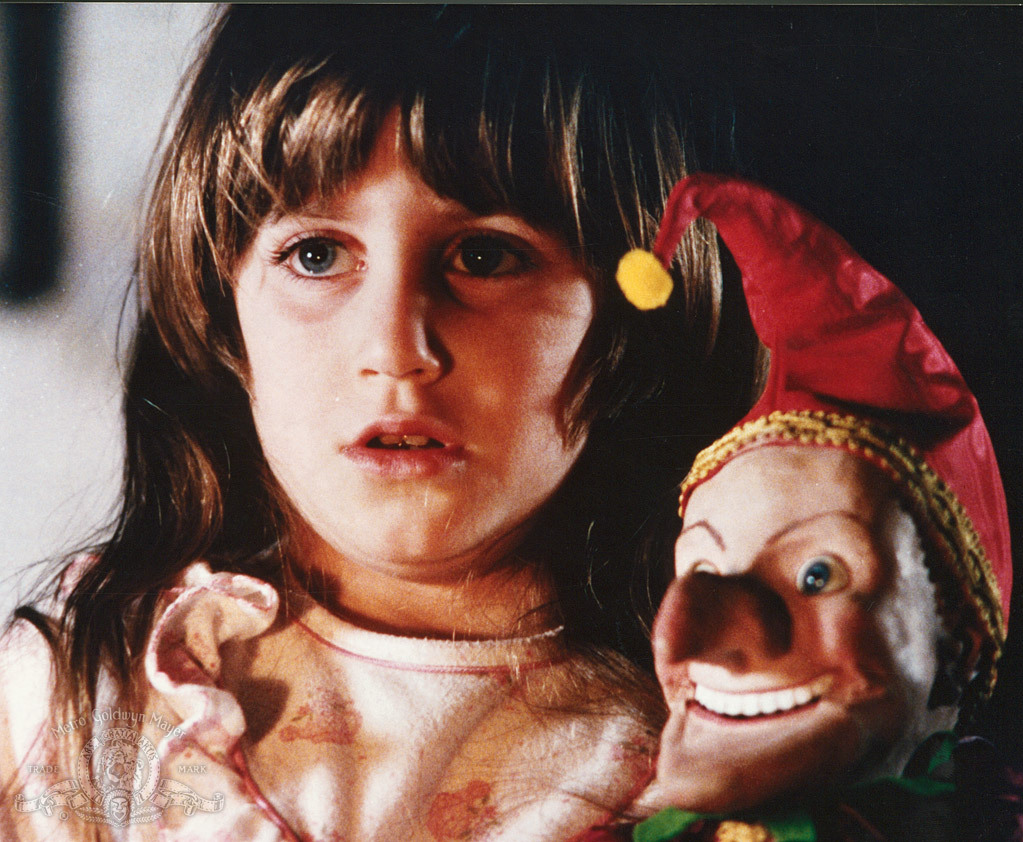 Dolls (1987) is a disappointing combination of unappealing characters played by actors trapped in terrible horror movie that’s a much worse comedy. Haunted dolls kill people and awkward humor esnues. One or two cool but all-too-brief shots of stop-motion dolls and the little grins are creepy, but the premise, tone, and morals (when people aren’t getting murdered by porcelain figurines or teddy bears) feel like a children’s story. It’s watchable, and has a few funny WTF moments, but not essential.

In Freejack (1992), Emilio Estevez gives perhaps his blandest performance to date but still manages to outshine a woefully miscast Mick Jagger in a story about a race-car driver who is brought to the future so his body can be a vessel for the consciousness of a dying Anthony Hopkins. Rene Russo also stars in this insane disaster of a film. How Did This Get Made is going to do an episode on it soon. I suggest you check it out as it’ll probably be good.

The Sword and the Sorcerer (1982) is an incomprehensible mess of the highest order. Some really good production values, special effects, R-rated violence, and dehumanizing female nudity, but this fantasy adventure is an endurance test of human understanding. We laughed through the whole thing, but were so frustrated with how difficult this convoluted plot was to follow. Clearly either footage was lost or they ran out of money. Highlight: semi-nude hero man is crucified at a banquet and rips his own hands off the beams and sword fights a room full of people using a triple bladed sword with projectile sabers.

The Nightmare (2015) is a Rodney Ascher documentary about sleep paralysis. Instead of giving scientific insight into the dreadful experience (I’ve had it myself multiple times), he just lets people talk about their recurring nightmares and then they stage scary reenactments. That’s it. That is literally it. The reenactments are cool, I guess. Maybe I was expecting something somewhat in-depth.

Don’t Think Twice (2016) will test your appreciation for the art form known as improv. It’s a good character drama and it has humorous moments and maybe I’m a Philistine but the improv scenes and wacky offstage theater kid banter just reminded me of why I prefer the company of stand ups. The story is relatable and moving, even if the writing doesn’t justify that the characters are supposed to be funny.  Mike Birbiglia is still a man to watch. He’s a clever storyteller with a lot of heart. Keegan-Michael Key, Gillian Jacobs, Kate Micucci, Tami Sagher, and Chris Gethard round out the improv troupe.

Ex Machina (2015) is a snazzy looking film with a few clever twists that you can probably see coming. The weird bro-y tension between Oscar Isaac and Domhnall Gleeson is great. The female actors all get the job of playing tormented, submissive, sexy sex robots. It’s good science fiction and there is a point to it.

Sinbad and the Eye of the Tiger (1977) is a re-watch from childhood. It’s beautiful, extravagant, hammy adventure times but Sinbad (Patrick Wayne) brings every magical moment to a screeching halt with his high-school-quarterback-trying-to-do-drama performance. The stop-motion Ray Harryhausen creatures are great (skeletal bug men, a cursed baboon, a giant bee, a mechanical minotaur, a giant troglodyte man, a witch-possessed saber tooth tiger). My main issue with this film (from a narrative point) is that the heroes don’t really sacrifice anything or do anything heroic. The villain (played with gusto by Margaret Whiting) has the actually harrowing adventure. She sacrifices and loses so much along the way that I sympathized with her far more than any of the protagonists.

John Carpenter’s The Fog (1980) is a classic horror movie about a sleepy beach town beset with an evil mist that harbors vengeful ghost pirates. The story is very silly, but the atmosphere is a lot of fun. Features Tom Atkins, Jamie Lee Curtis, Janet Leigh, and Hal Holbrook, but is is Adrienne Barbeau as local radio DJ Stevie Wayne that makes it fun. The story is dumb. I know. I just liked that little world.

Loving Vincent (2017) is a breathtakingly gorgeous and artistically immersive realization of the paintings of Vincent Van Gogh. If every frame feels like it could be hung on a wall, it’s probably because they all have. The story takes place a year after Van Gogh’s death. The son of a postman has to deliver a letter to the dead man’s brother and then decides to interview people to see how Van Gogh died. And this is the problem. The story doesn’t feel justified or motivated by anything. It’s rather bland, aimless, boring, and without stakes. In the end, it doesn’t really say much about Van Gogh either. Sumptuous and mesmerizing to look at (so much work went into this to paint every single frame), pity they didn’t have a story to tell. Miracle Mile (1988) is a bleak apocalyptic thriller that feels like a cross between After Hours and Dr. Strangelove. A milquetoast man meets the woman of his dreams at the Museum of Natural History of Los Angeles. A power outage causes him to miss a date with her but then a payphone tells him that America has launched a nuclear attack and the country should expect impending retaliatory destruction. Then it’s a mad dash to find the girl and get to the airport. Fun but bleak as only 1988 can deliver.

Blade Runner 2049 (2017) is fine. It’s fine. If you loved the original 1982 Ridley Scott classic then you’ll probably enjoy Denis Villeneuve’s sequel. Maybe I like this new movie better? I don’t know. The atmosphere, special effects, and cinematography are spectacular and I actually enjoyed the slow pace. But, to me, both films still suffer from a lack of interesting characters (Rutger Hauer and Ana de Armas excluded) and clear stakes and goals. Do our memories make us human? I don’t even get why people geek out over this question. It’s pensive. It’s moody. It has a great score and amazing visuals. I’m not disappointed I saw it. I just kind of wanted a clearer point. This isn’t Béla Tarr.

If Blade Runner is too needlessly complex, Desierto (2015) is simple.  Gael García Bernal and some other Mexicans are trying to illegally cross the border. Jeffrey Dean Morgan is a sadistic vigilante who tries to kill them all. He also has a very mean dog. That’s it. And that’s perfect as is.

Fresh (1994) is the story of a 12 year old boy (Sean Nelson) who delivers drugs and plays all of the drug dealers. Every move the kid makes is like chess. It can only work if he can see several of his opponent’s moves in advance. It’s a focused hood movie with compelling characters and building suspense. Features Giancarlo Esposito and Samuel L. Jackson.

Miami Connection (1987) might be as wonderful as Samurai Cop. A middle-aged Korean man named Y. K. Kim apparently wanted to be the next Bruce Lee. So he made this movie about himself and some middle-aged looking college students who sing rock songs about friendship and stopping ninjas. They are also skilled in taekwondo and are frequently shirtless. The hilarious, family friendly human drama is punctuated by some fun action scenes, brutal deaths, and boobs. If you love bad movies, this cannot be missed.

The Golden Voyage of Sinbad (1973) stars Caroline Munro’s glistening torso and her heaving, perfect breasts. Also some more great Harryhausen monsters (a cyclops/centaur, a giant walrus, a griffin, a couple homonicuses, a possessed ship figurehead, and a sword fighting Kali). And Tom “Dr. Who” Baker plays the villain. This was another re-watch. Caroline Munro really spoke to me in my childhood. Of the three Sinbad movies in this series, this one is probably my favorite.

Broadcast News (1987) is a romantic comedy drama I can get. Holly Hunter is a TV news producer with two guys vying for her affections, the unscrupulous but charming William Hurt and the principled nebbish, Albert Brooks. It’s a simple, sweet story with some fascinating insights into what goes on behind the cameras. The whole cast is great. I loved it.

I finally finished Gaspar Noé’s Enter the Void (2009). Shot almost entirely from the POV of a disembodied ghost, we hover over the neon streets of Tokyo and into traumatic memories of the past. It’s an aggressive, surreal, artistic masterpiece and I’m glad I gave it a second chance.

War for the Planet of the Apes (2017) is the best Planet of the Apes movie (after the original 1968 film). I keep trying to write off the series with each movie, but each entry into the new trilogy is better than the last. Brilliantly realized ape characters, beautiful cinematography, and wonderful post apocalyptic action. This film establishes the stakes early and builds the tension gloriously until it’s satisfying conclusion. It’s a good, smarter-than-average popcorn movie done right.

I Don’t Feel at Home in This World Anymore (2017) must have just hit me when I was in the right mood. Ruth (Melanie Lynskey) gets her house robbed and when the police are good-for-nothing, she awkwardly teams up with her weird neighbor, Tony (Elijah Wood), to track down the thieves. What I liked about this movie was how it set up the worldview of the protagonist—that being “people can’t be assholes” [and get away with it]—and basically makes the plot conform to that worldview somehow. It’s kind of beautiful in a way and perhaps what elevated this little crime drama to something special. It’s fun. It’s unpretentious. It’s got Elijah Wood with a rat-tail.

The Similars (2015) is my favorite thing listed here. It’s a tongue-in-cheek Mexican sci-fi horror flick in the style of a 1960’s melodrama. Don’t read anything about it. Don’t spoil it. If any of the description intrigues you, just watch it. I found this to be an exceedingly clever and playful movie with just the right doses of terror, surrealism, and offbeat dark humor.