If you are a fan of the tiny, little, obscure British band, The Beatles (occasionally you hear them mentioned today), or are a fan of bizarro animation—or even if you just like puns—then it is absolutely imperative that you view The Yellow Submarine (1968). With director Charles Dunning’s team’s incredibly lucid and inventive animation (inspired by the artistic styles of Heinz Edelmann) and some great songs from the legendary Beatles this super-mellow psychedelic trip of a film was brought to glorious, acid-dropping life. 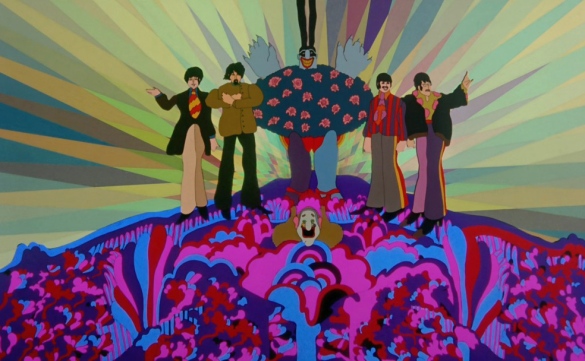 Picture yourself in a boat on a river…

The film follows Richard Lester‘s two previous live-action films, The Beatles, A Hard Day’s Night (1964) and Help! (1965). Like these films, Yellow Submarine would be a wild comedy with loads of silly Beatle antics, but this time it would be animated, rendering complete free range over the psychedelic tone and tundra. The Beatles themselves were not terribly keen initially with the idea of the film, so their speaking voices in the film were cast to other actors doing Beatles impressions (John Clive, Geoffrey Hughes, and Paul Angelis). Evidently, when the film was nearing completion the real Beatles saw the footage and loved it and thus agreed to appear as live action cameos at the finale. If the ringing endorsement from John Lennon, Paul McCartney, George Harrison, and Ringo Starr isn’t enough, then I don’t know what would be. The film features several fantastic songs including “It’s Only a Northern Song,” “Eleanor Rigby,” “Lucy In the Sky With Diamonds,” “Nowhere Man,” “All Together Now,” “When I’m Sixty-Four,” “Yellow Submarine,” and more. 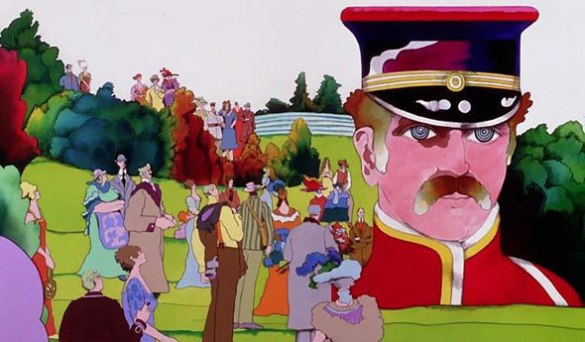 Like many band-centric musicals, the plot takes a comfortable backseat to much of the music and mayhem, but the plot is still enjoyable enough on its own.

Peaceful Pepperland is under attack by the nasty Blue Meanies who have zero tolerance for anything but rampant negativity. They set strange monsters out into Pepperland and bean all of the citizens with big, green apples, transforming them into silent, blue statues. Fortunately, Old Fred, the sailor, gets away in the Yellow Submarine. Advised by the Mayor to get help, he sails through land, air, and sea until he discovers Ringo.

Ringo takes Old Fred to the Beatle house where he meets George, John, and Paul. Old Fred is struck by the foursome’s uncanny resemblance to the former protector’s of Pepperland: Sgt. Pepper’s Lonely Hearts Club Band. Together they go on a quest to find Pepperland again and free it from the Blue Meanies. Naturally some singing is required for the trek as they sojourn across the Sea of Time to the Sea of Science to the Sea of Monsters to the Sea of Nothing to the Sea of Heads to the Sea of Holes to the Sea of Green. After “Eleanor Rigby” I’d say that some of my favorite songs are featured on their path through the seven seas. Once they arrive in Pepperland the Beatles must use the power of music and love to set the Pepperlanders free and bring happiness to the oh-so-blue Blue Meanies. If all you need is love then certainly we can all get along, right? 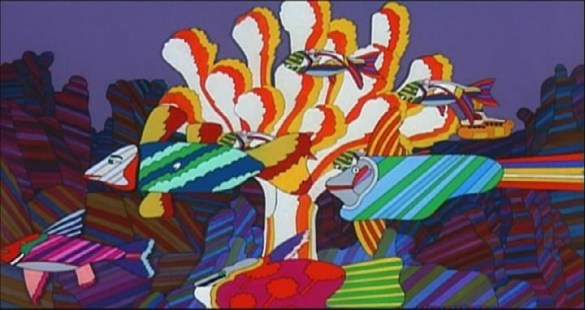 In a time when all violence, hate, and wars can be solved by flowers, long hair, and drugs, Yellow Submarine proved to be another megaphone expounding on the subject. It heralds a message that can be enjoyed by young and old alike. The bad guys are never really bad, they just need to see what they’re missing in order to come around. Yellow Submarine proves you don’t need rigorous conflict to tell a fun story (just like David Byrne’s True Stories). Indeed, the ‘battle’ between The Beatles and the Blue Meanies’ minions is the least interesting part of the movie. The exciting bits come from their mind-altering explorations through the Seas and the songs they sing along the way. The film achieves a sort of ultra-relaxed mellow. The world is fantastical enough on its own so why fight? The film voices the generation’s creed better than most. This movie is what the hippie ideology was all about. Make love, not war…because war is unnecessary and evil and love permeates every aspect of peace, kindness, and understanding. 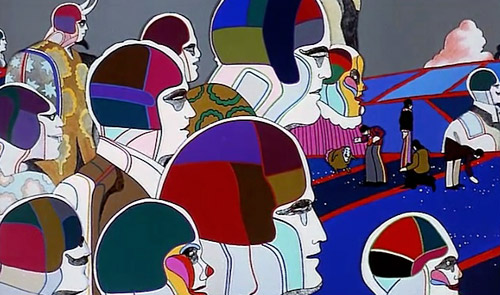 It’s a tough toss up as to who the real star of the movie is. Is it the music or the pictures? The animation morphs and contorts with such lushness and playful abandon that it dazzles the eye and tickles the funny bone and remains completely in step with the songs. Some of the songs are so wonderfully hypnotic, delirious, and playful that, perhaps, without them the pictures would feel incomplete. The perfect marriage of music to picture is nothing short of amazing. Yellow Submarine is like a pop version of Disney’s Fantasia. The colors and shapes are completely free and wild and it might prove difficult to refrain from joining in and singing some of the classic tunes. “It’s all in the mind,” so the recurring line goes.

People have said that this movie is just about drugs, specifically LSD. I think this is unfair, for although there is logic behind the assumption considering the era and source of much of the material, I submit that it is more a celebration of the imagination and creativity (which some might argue is the purpose of LSD, but it would still merely be the train rather than the destination). You don’t need drugs to see the magic. It’s already there. Lewis Carroll, M. C. Escher, and Terry Gilliam didn’t need it. Perhaps the filmmakers of Yellow Submarine were simply reveling in the fact that animation could do anything. The movie is more about the magic of a perfect world where everything is peaceful, musical, and mellow.

Yellow Submarine is brisk, funny, and full of wonder. A good movie takes you places and Yellow Submarine definitely does that. It’s a highly imaginative and enjoyable experience. It’s weird, wild stuff and it won’t be for everybody, but if you like the message, the incredible artwork, or great Beatles songs then check it out. (On a personal note, I do wish “Strawberry Fields” was in this movie). Perhaps the hippie lifestyle isn’t as prevalent as it was in the 1960s when this film came out, but then perhaps there are certain messages that we can all get behind no matter what part of the century we’re from.

Make love, not war. All you need is love. It’s all in the mind.

Originally published for “The Alternative Chronicle” May, 18, 2010