Once again I watch movies and rank them arbitrarily by what I thought of them. 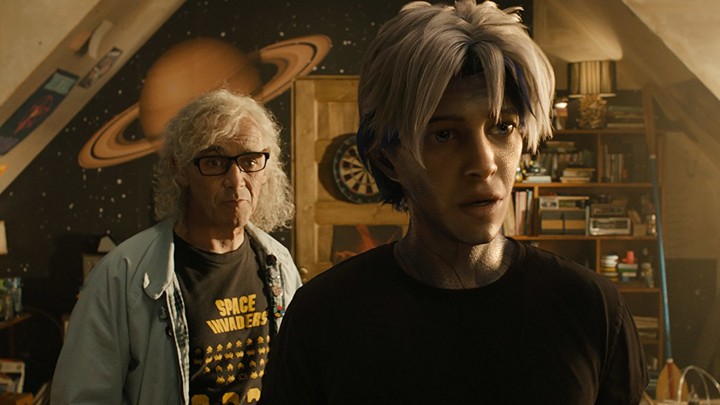 17. I’ve never been more disappointed to see the Iron Giant. What happened to you, Steven Spielberg? You used to be cool. What even is Ready Player One (2018)? This unwatchable garbage somehow manages to make nostalgia feel as cheap, hollow, and gross as it probably should have been all along. Maybe it’s because I’m not a gamer, but I had a hard time finding anything interesting in the plot, the characters, or even the visuals. Obnoxious kids with no point of view play a video game in a giant online platform to Willy Wonka themselves into saving the digital world from a corporation. And a lot of the goings on hinge on the audience buying that the kids of the future will be as obsessed with 80s and 90s pop culture as we are. 16. It may be boring and not scary in the least, but at least it’s annoying too. Stephen King’s Children of the Corn (1984) is the story of a rural Nebraska town where the kids have started worshiping some blood-thirsty entity and have killed all the adults. Then Linda Hamilton and her boyfriend wind up there. Creepy Midwestern cult town premise is fun. Sadly squandered on this movie. How did this manage to collect 8 sequels?? 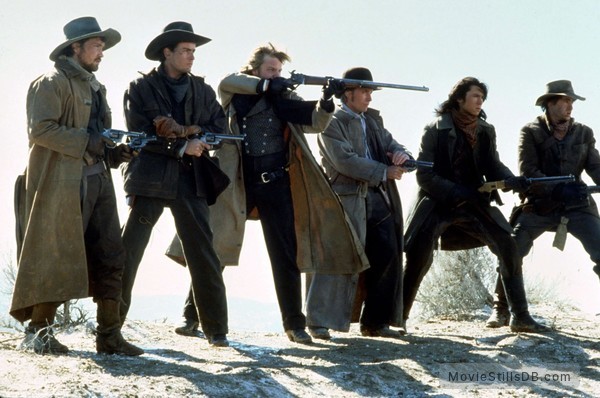 15. Emilio Estevez is Billy the Kid and his gang is comprised of Lou Diamond Philips, Kiefer Sutherland, Charlie Sheen, Dermot Mulroney, and Casey Siemaszko in Young Guns (1988). And it is everything that Silverado did, but not as good. The cast is appealing and the scenery is gorgeous, but it doesn’t all quite flow. Weirdly, the sexy saxophone and electric guitar laden soundtrack by Anthony Marinelli and Brian Banks, while amazing by itself, really gives the movie as a whole a dated and hokey feel. Honestly, you can skip the film. Listen to the soundtrack. It’s great. Also features Terence Stamp, Terry O’Quinn, and Jack Palance. 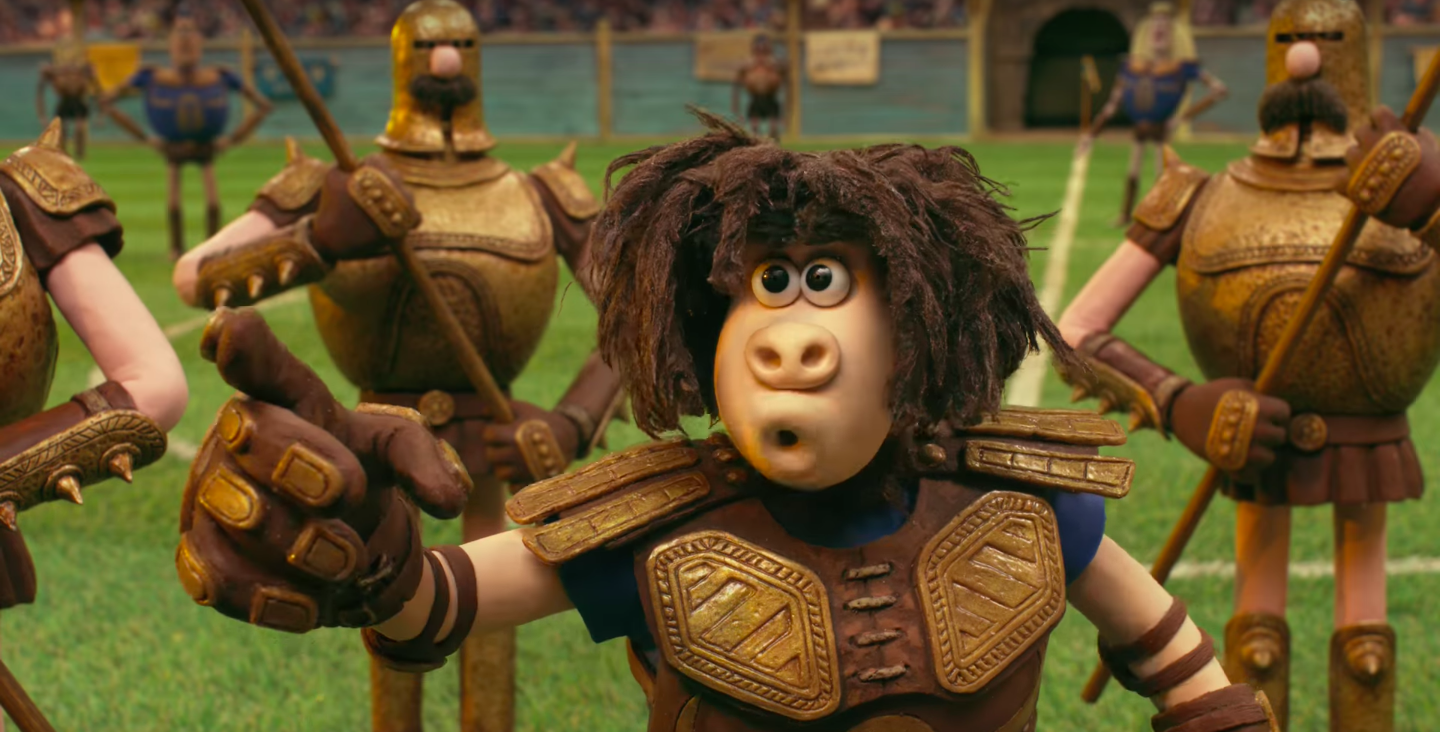 14. I will probably see anything that comes out of Aardman Studios. From Wallace & Gromit and Chicken Run to The Pirates! In an Adventure with Scientists!, they have proven that they know silly and are pros in stop-motion animation. I trust them and I trust Nick Park. Early Man (2018) might be my least favorite, but it still has some comfortingly British quirk appeal. It’s about a clash of tribes (one more technologically advanced while the other is good-natured but simple and stunted) and how they meet on the soccer green to even things out.

13. I love me some classic Jackie Chan and Armour of God 2: Operation Condor (1991) has some great action set pieces. Jackie and three international women (Carol Cheng, Eva Cobo, and Shôko Ikeda) race across Morocco to McGuffin McGuffin McGuffin. It doesn’t matter. None of it matters. And that’s fine. The the Nazi base wind tunnel fight finale is a high point. Like a lot of Jackie Chan movies, it’s more about the star’s charm, charisma, and dangerous physical stunts that propel it forward. I would have ranked this one higher (as the fight choreography is great), but the godawful musical score sucks so much suspense and energy out of every single scene. Watch the movie. The wacky synth antics are way too silly and cheap. A lot of the non-physical comedy is awkward too. Then there’s the Tintin levels of racial caricature. But really, it’s the music that drags this adventure down several pegs.

12. I hadn’t seen Hocus Pocus (1993) since I was a kid and I don’t think I ever watched the whole thing. I do find the typical 90’s Disney live -action teen protagonists to be insufferably saccharine and ultimately the story and squeaky tone are a bit too Disney channel made-for-TV Halloween movie-of-the-week for my taste, but those witches. Bette Midler, Kathy Najimy, and Sarah Jessica Parker are having so much goddamn fun in their cartoony roles, that it’s absolutely infectious. Yes, the movie itself is cheesy and bad. And those talking cat special effects have not aged well. But the playfully fake and well lit sets and the wonderfully wacky witch performances make it more than watchable fun. Also, very young Thora Birch.

11. I couldn’t make it more than 20 minutes into Tales from the Darkside. Maybe it gets better, but I couldn’t do it. So I switched to another zany horror anthology flick, Stephen King’s Creepshow (1982). It’s whimsical and macabre Halloween fun. I wish it had been a bit funnier or a bit scarier (or both), but it was a pleasant palette cleanser after Darkside failed to enthrall. 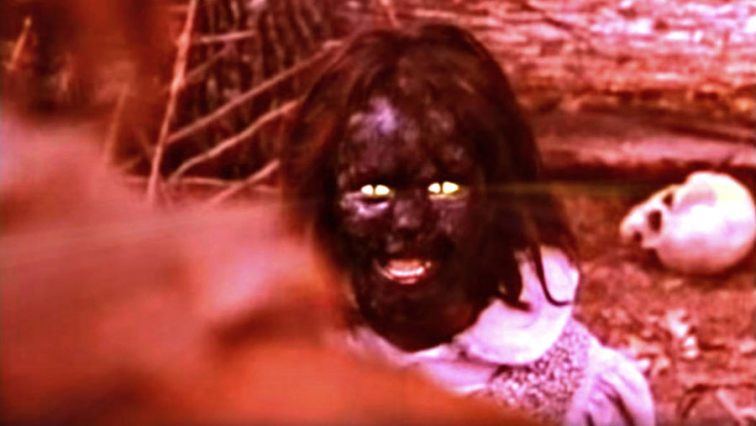 10. This next one was an interesting recommendation (I do so appreciate those). Eyes of Fire (1983) is an independent horror flick set in the wild American frontier. Some settlers wander into uncharted territory where the Native tribes will not enter. But there’s something in the ground that is evil. It’s a unique, lo-fi slow-burn of a film, but it definitely has that folk horror atmosphere. 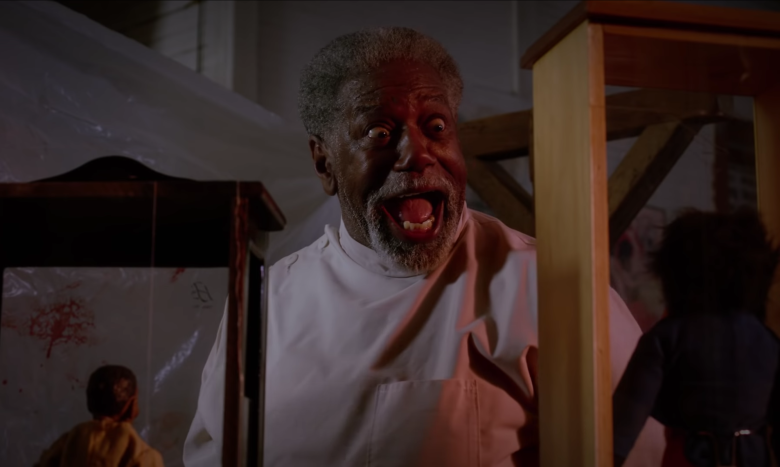 9. Tales from the Hood 2 (2018) is the type of wacky, satirical horror anthology that I look for. The movie is just having fun spinning these tales and Keith David looks like he’s having an absolute blast chewing the scenery as an enigmatic storyteller. He’s telling stories to help program a police robot that would be used by a corrupt, racist private prison owner. Naturally, he installs the robot with a greater understanding of race relations than the inventor intended. I definitely need to watch the original Tales from the Hood now.

8. So I take it that this movie disregards all but the first Halloween from 1978. If you love the deranged killer in a mask aesthetic, Michael Meyers is kind of the gold standard. Halloween (2018) sees Michael’s return, as well as the return of Jamie Lee Curtis (who looks just a bit too put together to be this obsessed, tortured recluse. Seriously, mess the woman’s hair up a bit or something). It’s got its share of silliness, but the movie’s strengths lie in capturing that pared down retro feel. It’s a simple little slasher flick that hearkens back to a simpler time. I wanted more of the babysitter and that kid dynamic. Only interesting characters in the movie.

7. Beyond the Gates (2016) is a retro-styled indie horror flick that answers the question: What if Jumanji was Saw though? This very slow thriller follows two brothers who discover a spooky VCR board game in the back of an old VHS store. Can you feel the 80’s yet? Also, their dad might be trapped inside. I liked the understated performance by Graham Skipper, the synth intro, and the lady on the TV screen (Stuart Gordon regular, Barbara Crampton!). It’s slow, but atmospheric, and it has a bit of gore. Not a bad flick to stick on this Halloween.

6. Ex-Machina director, Alex Garland, is back with more depressing sci-fi. Annihilation (2018) is a pretty solid story about life, evolution, and, potentially, our ultimate doom. Something lands from outer space and begins to spread like a cancer, slowly attaching itself to every living cell and altering the ecosystem in unexpected ways. It’s slow and smart and sometimes freaky. The main cast includes Natalie Portman, Jennifer Jason Leigh, Tessa Thompson, and Gina Rodriguez. They are all fine actors, but something about the overall atmosphere of this movie renders their performances here sadly dull. This movie gets by on its intriguing concepts, metaphor, and some creepy visuals. Also, that music at the end in the lighthouse. What was that? Amazeballs. That’s what it was. 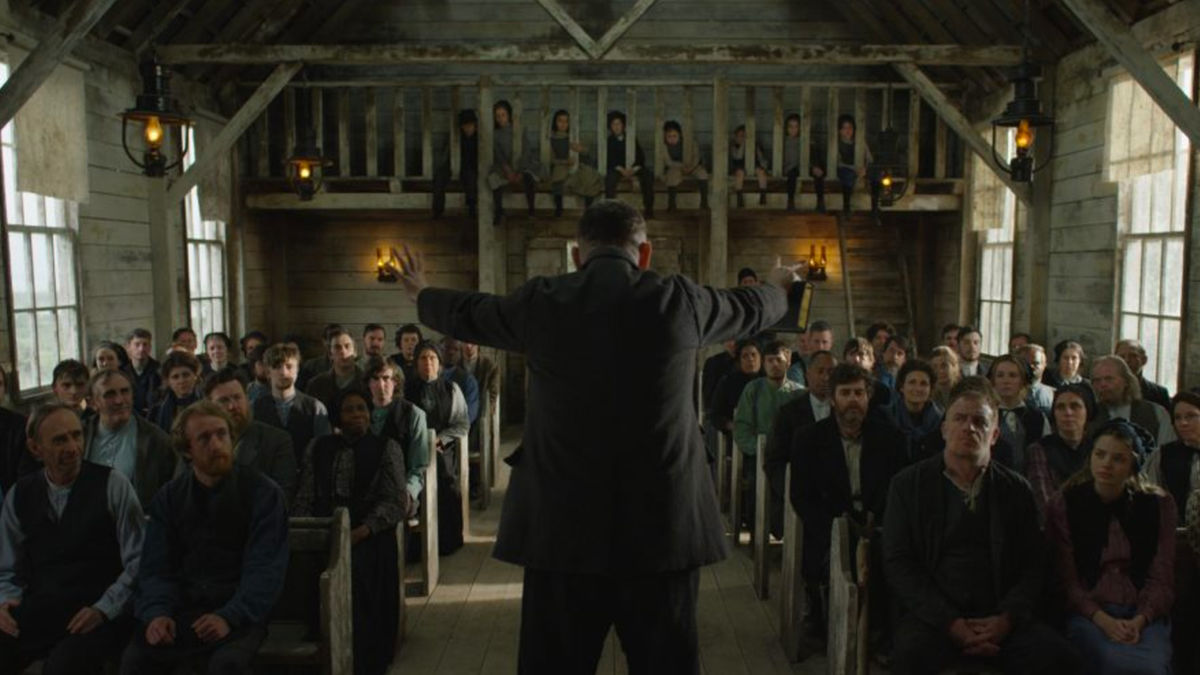 5. The Raid director, Gareth Evans, tones the action down a bit in favor of a brooding period thriller set on a craggy island inhabited by a weird, budding cult. Apostle (2018) may pay some homage to the classic Wicker Man type of tale, but it had a few turns that make it something unique. It is beautifully shot too. There was one surprise about this particular cult that is revealed about two-thirds the way through and that is kind of what elevated it for me. It’s not The Witch, but overall, a pretty good period horror movie. 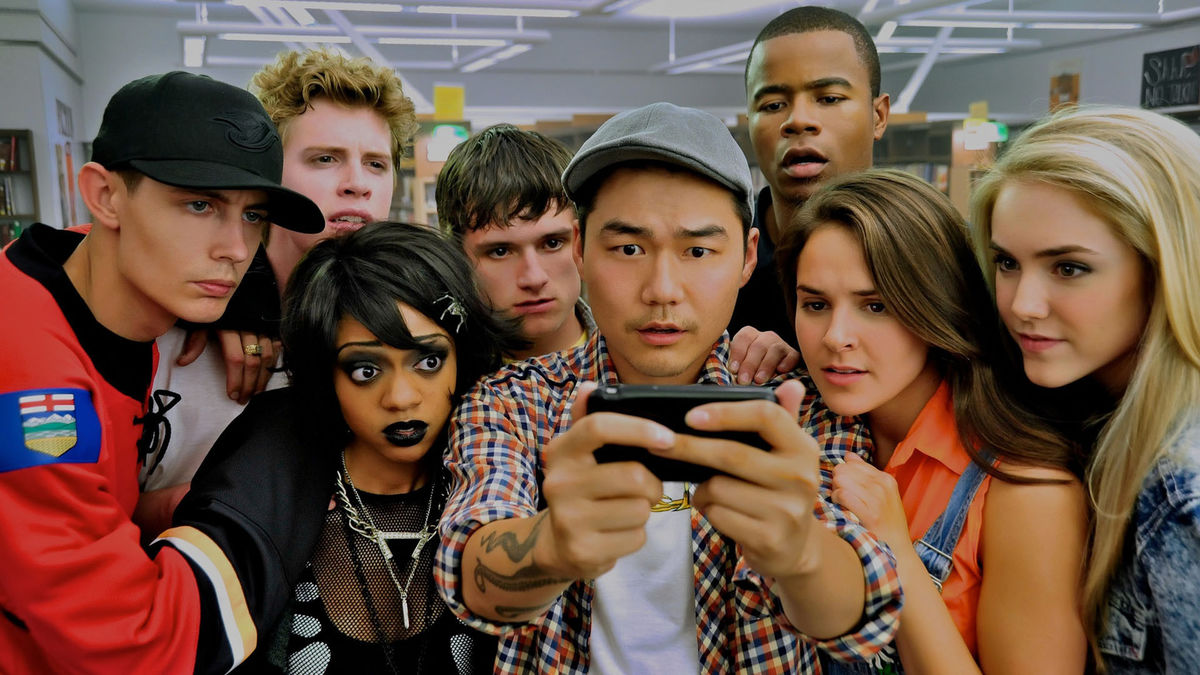 4. Detention(2011) is a stylish surreal-meta-indie-horror-comedy-science-fiction film that is exploding with style and flare to spare. Is it a slasher movie? Is it a time travel movie? Is it a teen romance movie? Is it everything and more? Yes, to the last thing. Riley (Shanley Caswell) feels like a loser at Grizzly Lake High School. And prom is coming. And so is a masked serial killer. But this little comedy is far too clever to be so simple. I’d rather not say more. Watch it.

3. If you are a fan of Dolemite, Blacula, or Coffy then chances are you’ll get exactly what Black Dynamite (2009) is doing. Black Dynamite pays homage to classic 70’s blaxploitation while also serving as a righteous spoof of the genre. It’s an over-the-top and tongue-in-cheek funky adventure that is running purely on its style and humor. The cast (led by co-writer Michael Jai White as the eponymous Black Dynamite) is all hitting the tone perfectly. This is a winky, clever movie for movie fans.

2. And now for a little silent Scandinavian documentary on the history of witches. Haxan (1922) aims to educate, dramatize, and creep you out. Beginning with profiles on cross-cultural ghouls and ancient models of the universe, this bizarre film stages spooky reenactments set in witch hovels adorned with bird skeletons, cauldrons, and demons. It’s all pretty cool and watching it now, it functions as a twofold time capsule.

1. Perhaps, the film with the most style this time around is Mandy (2018), and it is absolutely bonkers. Directed by Panos Cosmatos (Beyond the Black Rainbow), this is one gnarly and seriously messed up movie. It’s a simple revenge plot. Evil cult does bad things. Nicolas Cage must get revenge. But between purple lit chainsaw duels and LSD-addled demon biker gangs, there’s a weirdness that’s hard to quite put a finger on. It feels like a dream, or, perhaps more aptly, a drug-induced nightmare. It’s violent, mean, and totally insane. For those with the appetite for this type of nonsense, it comes highly recommended. Once again, the score is hypnotic.