This ain’t exactly going to be W.E.B. DuBois.

One of the most inflammatory movie titles one can utter is Song of the South (1946). Am I racist for liking this movie? Some people might think so. I concede that Song of the South is not Roots (1977) nor is it Amistad (1997), but it’s sensibilities are far less prejudiced than say Birth of a Nation (1915). It’s probably more artistically comparable to Birth of a Nation in that it was a surprising technical achievement, but I submit that Song of the South is not quite as racially insensitive as is commonly perceived (or at least, it doesn’t mean to be), rather it is merely uninformed and maybe not that bad of a movie.

Don’t do the review, man. It’s not worth it.

It’s been banned in its entirety for years and Disney still hasn’t released it. Frederick Douglass would undoubtedly be appalled by Disney’s apparent lack of understanding of the plight of the American slave showcased in this film. In fact, it is in this department that the film gets the most flak, and perhaps deservedly so.

It depicts the jolly slave affably singing and toiling in the fields for his masseh. No one is discontent with the fact that they are living in human bondage. Naturally, the slave owners themselves are kind-hearted and good people too. Kindly old Uncle Remus is only too happy to oblige his masseh in any task and there are really no consequences for disobedience. I concede all of these things, but I honestly was not expecting a serious look into the harsh realities of this dark hour in American history. I watched it for the cartoons. This is a family Disney film from the 1940’s. Maybe they were ignorant and oblivious to what actually went on, but even had they known and still chosen to water it down it would still be the Disney way. In a children’s fantasy film from the Walt Disney studios you don’t show the bloody stripes on the backs of your jovial protagonists. You have to wait until the 80’s for that.

Song of the South is not attempting to be Johnny Tremain (1957) or Davy Crockett, King of the Wild Frontier (1955), which may take some liberties but are still trying to represent an historical time. Song of the South was an attempt to bottle some of the magic of Uncle Remus’s tales of Br’er Rabbit and I’d say they succeeded in doing that much. In fact the only real reason to watch Song of the South is for the animated segments and for James Baskett’s charismatic performance as Uncle Remus. 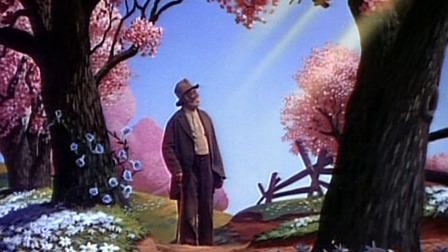 Well, this is a fine how do you do.

Some might say that Baskett was playing a stereotype just like Hattie McDaniel in Gone With the Wind (1939), but they still both crafted lovable, endearing characters that outshone the rest of the respective films they were in. Maybe they didn’t get the complex juicy roles because the prejudices of the times would not give them much more, but they did what they could with the material given to them. It’s a damn shame McDaniel really only ever got to play slaves or maids, but don’t sell her talent short. I think she deserved that Oscar. Baskett also did receive an honorary Academy Award for his performance in Song of the South and Walt Disney himself fought very hard to get him nominated. Ironically (and sadly), Baskett was unable to attend the premiere of his film in Atlanta because of the segregation laws at the time. Let’s not forget how hard it was for ethnic actors back then.

The film itself is your typical uber-saccharine tale of a young boy who learns life lessons. The child performances are nothing to write home about and much of the live-action stuff gets boring whenever Uncle Remus isn’t around, but be patient.

Tell us the story of Django again!

Poor little Johnny (Bobby Driscoll) is hoodwinked into thinking his little trip to his grandmother’s plantation is a delightful vacation…until he learns that his parents are separating (still not too sure why, but I suppose that’s not important).  This actually might have fed the controversy too. If a kid’s movie is edgy enough to attack the stigma of parental separation on children, might it at least have the guts to depict racism and slavery with a little more accuracy? Instead there is no racism, only bullies, and slavery is just a footnote because the story happens to take place in Georgia in the 19th century. Ah, well.

Back to Johnny. Fortunately for Johnny he makes friends with wise, old Uncle Remus who “edutains” with stories of Br’er Rabbit and how he outsmarts Br’er Fox and Br’er Bear. Johnny’s mother disapproves of the stories because she feels it has a negative impact on her son and she forbids Uncle Remus from telling him any more. Throughout the movie Johnny finds a puppy, makes friends with a girl, deals with bullies, wrestles with anxiety over his parents, almost gets killed by a bull, and always tries to sneak back to his friend Uncle Remus to hear more. The story is sweet and innocent enough and if it didn’t feature slaves as content watered-down Stepin Fetchits it would probably be another much celebrated film in the Disney canon. Alas, it suffers from controversy…which I think actually makes it much more interesting and more important.

The scenes that combine live-action with animation are wonderful. Uncle Remus sings as he strolls down a dirt road and all of the adorable anthropomorphic animals sing along. It has been parodied much, but these sequences are really well done and they were huge technological breakthroughs at the time and although Song of the South might not be Mary Poppins (1964), I’d say it’s a far more stimulating accomplishment than Bedknobs and Broomsticks (1971). The three main animated segments featuring Br’er Rabbit are magical and as finely drawn as anything the Disney studios ever produced. They brim with peril, humor, and wisdom and each tale delivers another important lesson for Johnny (and us all), but they are told with such playfulness and gusto that they are a delight to hear again and again. Br’er Fox, Br’er Bear, and Br’er Rabbit are charming characters and the film develops them quite well. Even if you’ve never seen the movie, you are probably already familiar with them from the Splash Mountain log-floom ride at Disney theme parks. And almost everyone has heard the songs “Zip-a-Dee-Doo-Dah” and “How Do You Do?”

So what exactly do we have here? A great technological accomplishment, a fine story, some very enjoyable performances, great iconic songs, and splendid animation thrust amidst some blindly optimistic time capsule with extreme naiveté regarding race relations and overwrought with classic Disney sentimentality. All in all, I’d say it’s nothing most people wouldn’t be able to handle with some maturity. Song of the South is guilty of depicting the happy black man who is perfectly content with his subservient status beneath whitey’s thumb. It does show a clean and delusionally optimistic version of life on the southern plantations. It is a product of its times. It was also a huge passion project for Mr. Disney. And you know what? I liked the movie. I found myself being captivated by Uncle Remus’s enchanting yarns and the beautiful animation. I also loved Dumbo (1941) too. People always told me as a kid that the crows were racist. They may portray stereotypical black speech and characteristics, but they’re really the only decent folk in the movie apart from Dumbo’s mom and Timothy Mouse.

Over there! Something controversial!

I remember reading the stories of Br’er Rabbit and his adventures when I was a little kid. I enjoyed the stories then and I enjoyed them being retold in the movie. He was way more interesting than Beatrix Potter’s Peter Rabbit to me. He was smart and savvy, and although his wise-alec attitude got him into trouble, he always could think up a way out. The film stays true to the original characters and its not nearly as racist as the thousand other racially insensitive cartoons and movies from that era and earlier (and I’d still advocate their preservation too). So will watching Song of the South today promote racism? I’d say no. If anything it can give us an insightful glimpse into American history. Not the sad history of American slavery in the 1800’s, but the unfortunate history of 1940’s Hollywood. It’s a pretty good film on its own, but I’d say the controversy and historical context actually enhances it and provides more to discuss. Check it out if you can find it.