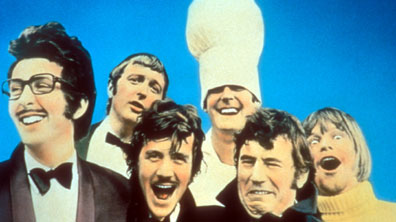 Terry Gilliam is a highly imaginative man with a background as a cartoonist and animator. He has a famous history with Monty Python’s Flying Circus and he makes extremely high-concept yet personal fantasy films that usually have a dark sense of humor and a wonderfully skewed (but not far off) view of the world. Here is responsible for such wonderful films as Twelve Monkeys (1995) (best Bruce Willis and Brad Pitt performances!) and Fear and Loathing in Las Vegas (1998) (best Johnny Depp and Benicio Del Toro performances!). And his Python stuff is amazing! Love him or hate him, you have to admit that Terry Gilliam has been a unique and fascinating voice in the world of film.

I was meh on Jabberwocky (1977); mixed on The Fisher King (1991); disappointed by The Brothers Grimm (2005): a little iffy on Tideland (2005); and not quite sold on The Imaginarium of Dr. Parnassus (2009), but he is still one of my favorite filmmakers. Gilliam always offers tantalizingly askew visuals blended with humorous surrealism. I don’t have to think hard to come to the conclusion that my all-time favorite movies from Mr. Gilliam are from his unofficial “Dreamer Trilogy”: Time Bandits (1981), Brazil (1985), and The Adventures of Baron Munchausen (1988). All three feature protagonists who are stuck in a bureaucratic/materialistic world and must deal with the unapologetic clash of fantasy and reality. In these worlds dreams are the only escape.

Time Bandits features the dreamer character as a young boy named Kevin (Craig Warnock). Kevin’s parents are tedious TV-heads who seem aloof at best. Kevin prefers reading about history and magic and amazing battles rather than watch nauseating game shows with his parents. When a group of time-traveling dwarfs (played by Jack Purvis, David Rappaport, Malcolm Dixon, Kenny Baker, Mike Edmonds, Tiny Ross: former Ewoks, Oompa Loompas, elves, and aliens from other science fiction and fantasy films—Kenny Baker was R2-D2!) show up in Kevin’s room on the lam from the Supreme Being (Sir Ralph Richardson), Kevin winds up on the adventure of a lifetime.

“Oh, Benson, you are so mercifully free of the ravages of intelligence.”

The Time Bandits travel through time with the only map of all the holes in the universe (the fabric of which is evidently far from perfect). They burgle people throughout history. The ragtag band meet up with an insecure Napoleon Bonaparte (Ian Holm), a prissy Robin Hood (John Cleese), noble King Agamemnon (Sean Connery), and many other fun characters (played by Michael Palin, Shelley Duvall, Peter Vaughan, Katherine Helmond, Jim Broadbent, etc.) all whilst being pursued by the Supreme Being who wants his map back. Then there’s Evil (in a delightfully wicked performance from David Warner). Evil wants the map for himself so he can rule the world. The film is a nonstop delight of eccentricities and oddities. Warner, Cleese, and Palin steal some of the best lines. 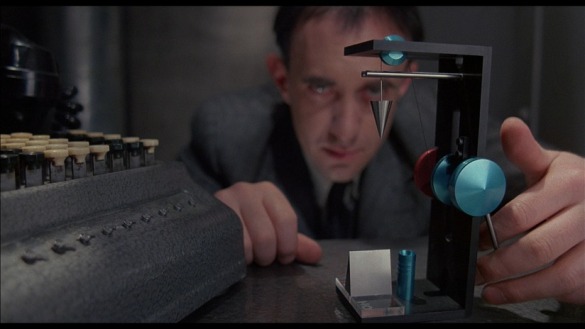 How decisions are made.

Brazil follows the daydreams of an adult man named Sam Lowry (Jonathan Pryce) in a not-too-distant future nightmare that blends the styles of the 1940s with archaic projections of the space age alongside Gilliamesque flights of fancy. The look of this film is amazing and the story is a sort of amalgam of James Thurber, George Orwell, and Franz Kafka.

It’s only a state of mind.

Sam is a spineless cog in the creaking wheel of bureaucratic progress (although progress is pretty static in Gilliam’s take on the world). His mother (Katherine Helmond) keeps getting plastic surgery; his apartment is being trashed by disgruntled electrical technicians (Bob Hoskins and Derrick O’Connor); terrorists—or maybe it’s the government?—keep bombing places; Sam’s best friend (Michael Palin) happens to torture people for the state; and a strange underground vigilante/heating engineer (Robert DeNiro) seems to be the only one who makes any sense in this cock-eyed reality. Other members of the cast include Jim Broadbent, Peter Vaughan, Jack Purvis, and Charles McKeown. While Sam is hard at work in the relentless machine, he dreams he is a winged superhero battling samurai, rescuing the girl, and fighting obstacles that vaguely mirror the problems in his waking life. When Sam discovers that his dream girl (Kim Griest) really exists he will attempt to take on the system to save her life and save the day, because when the real world is as bleak as it is in Brazil sometimes dreams are the only things worth fighting for. 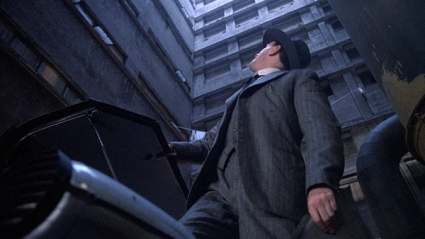 “Brazil, where hearts were entertaining June. We stood beneath an amber moon. And softly murmured ‘someday soon.'”

The humor is dark, the hallucinations deliriously captivating, the tone gritty and gray, and the solutions elusive and thought provoking. The scary message still rings true today. I still feel Brazil to be one of Gilliam’s absolute best and most significant films. 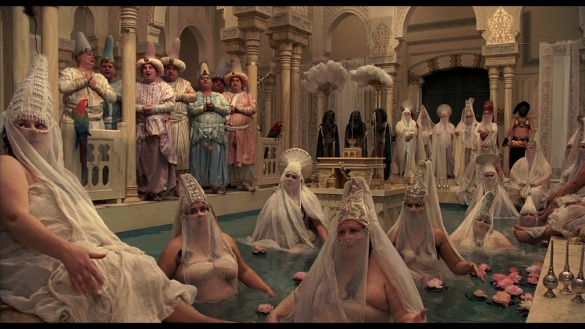 The Adventures of Baron Munchausen based on Rudolph Raspe’s novel, puts us in the seat of aging fantasist, Heironymus Karl Frederick Baron von Munchausen (John Neville). The Baron seems out of place in the Age of Reason, but seeks to set the record straight about who he is in a bombed out theater in a battered town under siege by the Turk. Everyone has been treating the Baron’s stories as fiction until young Sally Salt (Sarah Polley) believes him and the two go on a fantastic adventure to find the Baron’s extraordinary friends who can help save the town. They travel to the moon in a balloon to rescue the Baron’s amazingly fast companion, Berthold (Eric Idle), but the King and Queen of the Moon (Robin Williams and Valentina Cortese) have other plans.

“He’s not going to get far on hot air and fantasy.”

They then descend into the center of the earth via the volcano of Mt. Etna where they meet the short-tempered god, Vulcan (Oliver Reed), and lovely goddess, Venus (Uma Thurman). There they also discover the Baron’s super strong friend, Albrecht (Winston Dennis). After they pass through the center of the earth and emerge on the other side they’re swallowed up by a giant sea monster and inside they find several broken ships and two more of the Baron’s disassembled band: the hawk-eyed sharpshooter, Adolphus (Charles McKeown), and the dwarf with a mighty wind for breath, Gustavus (Jack Purvis). It’s up to Sally to believe in the Baron whenever he gets discouraged and to chase away the Grim Reaper whenever he tries to collect the Baron’s soul. Once they reunite with the Baron’s trusty steed, Bucephalus, Sally and the band of geriatric heroes return to the town to battle the Turk and silence the fantasy-hating Right Ordinary Horatio Jackson (Jonathan Pryce). Thus the old dreamer conquers all through the power of fantasy. 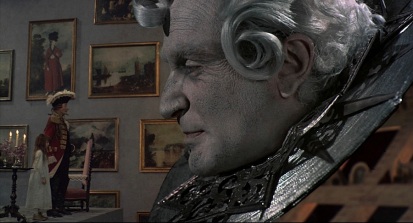 “The body is dead. Long live the head.”

You will notice many recurring actors in Gilliam films as well as an apparent affinity for tattered, complex garments and incessant use of extreme wide-angle and deep focus lenses. He gets compared to Tim Burton sometimes because they both have very strong visual styles that dictate a unique tone, but they are very different filmmakers indeed. Burton’s aesthetics originate from silent German Expressionist cinema. Gilliam seems more inspired by Heironymous Bosch. I’ve said it before and I’ll say it again: Gilliam should have directed Alice in Wonderland! Terry Gilliam is a talented dream-weaver and when he is at his best, it’s sits uneasily with you. When he’s at his most off, it is still fascinating to observe. Gilliam celebrates the wonders and the horrors of the untamed imagination. I admire and am in awe of where Gilliam seeks to take us and I hope you too will take the tour.

Enter if you dare…